Within the hierarchy that is the BMW product line-up, it is the models that wear the number 7 which represent the best of what you can get. Granted there is the BMW 8 Series, but that’s more a repositioning and rebranding of the BMW 6 Series. That being said, the BMW 7 Series had long been the sole model at the top of the range, but a few years ago that changed.

We’re talking about the launch of the BMW X7, which made its global unveiling back in 2018. Just as the BMW X3 was to the 3 Series and the BMW X5 was to the 5 Series, the BMW X7 is the largest SUV currently available from BMW, and would go on to fight the Audi Q7 and the Mercedes-Benz GLS. It’s also the only product from BMW that features a full three rows of seats.

If you’re wondering about the BMW X5, it does indeed have a third row – but this pair of seats is incredibly small and meant more for children than full sized adults. Not so with the BMW X7, where there are also six-seater configurations in other countries but our local models are specified with the seven seater option entirely.

The local launch of the BMW X7 was back in 2019, and just two years later there was the official introduction of the locally assembled variant, phasing out the fully imported model. For the time being, the BMW X7 is only offered with a singular powertrain and a singular variant.

Powering the sole variant of the BMW X7 in Malaysia is, as the name suggests, a turbocharged 3.0-litre petrol engine that makes a not insignificant 340 hp and 450 Nm of torque. Paired with the eight-speed conventional automatic transmission (the ever adored ZF 8HP), this behemoth of a car manages to sprint to 100 km/h from a standstill in just 6.1 seconds – quicker than your average hot hatchback, surprisingly enough.

As is the case with all X models from the BMW X3 and up, the BMW X7 comes with all-wheel drive as standard. The locally assembled variant also added in rear-wheel steering to improve agility when you need it at lower speeds, and stability for high speed lane change manoeuvres. These items are especially important when you remember just how long, wide, and heavy the BMW X7 is.

There’s something both incredibly imposing and yet wildly familiar about the BMW X7. When viewed in isolation, it’s the latter aspect that takes charge: the proportions are in line with most of the other BMW SUV products in the line-up, bearing a traditional two-box SUV design with a sportier stance and width that makes it look less top-heavy and more exciting in a sense. On the other hand, once you see the BMW X7 parked next to something like 3 Series, you start to understand exactly how large of a car it is and how dominating it would look on the road.

On the inside of the BMW X7 is pretty regular fare, from the layout to the choice of materials. In this way it’s pretty pleasant to be inside of, with a slightly driver-centric layout and the typical modern BMW switchgear panel surrounding the shift lever. What’s rare here is the inclusion of wood trim, which seems a bit out of place considering most BMW models tend to avoid this choice of material. It presents a nice contrast to the dark colours implemented throughout the rest of the dashboard and car.

It’s interesting that between the fully-imported and locally-assembled variants, there are very minor differences in terms of the safety features of the BMW X7. The initial imported model came with the BMW Driving Assistant Professional package – whereas the one that’s currently on sale makes do with the regular Driving Assistant package that includes items like Lane Departure Warning, Lane Change Warning, Front Collision Warning with brake intervention, and so on. That being said, the Adaptive Cruise Control with stop and go has been added back in as part of the local specifications.

When it comes to this particular market segment, where you’re at the very top of luxury cars and on the verge of ultra-luxury, it becomes a little bit difficult to discern the exact strengths and weaknesses of a particular model in the context of a comparison. The truth is that all options are pretty fantastic cars, and it comes largely down to brand loyalty and preference in the way they look and feel.

In that sense, the strengths of the BMW X7 are similar to that of any other BMW in the model range: impeccable handling dynamics and agility, with an emphasis on sportiness in both design and engineering. The result is a seven-seater, three-row SUV that could probably be taken onto Sepang International Circuit for a couple of laps without breaking a sweat.

The trade-off however is that the BMW X7 is probably not the most comfortable option on the market, nor is it the roomiest. But if you are a fan of the BMW brand, and your purchase decisions have led you to consider the BMW X7, then this probably isn’t the largest of issues for you. Perhaps the only gripe that we have is that the BMW X7 brought forth the comically large kidney grilles that BMW has applied to every new product that they roll out.

The issue of pricing with the BMW X7 is interesting, as there was a significant drop in price between the fully imported and locally assembled variants. When the model was first introduced in its xDrive40i Pure Excellence trim, it was priced at a whopping RM 888,800 – a pretty auspicious number. Come the introduction of the locally assembled model and that price drops significantly to RM 648,934 – again for the same specification of car.

There’s not a person out there who could look at the equipment list for the BMW X7 and think “they could have added more”. After all, being a flagship SUV means it has to come with absolutely everything BMW has to offer, and thrown the kitchen sink at it they have. There are screens in the back of the front row seats to provide entertainment to second row passengers. There’s five-zone automatic climate control, electrically adjustable front seats, a 12.3-inch fully digital instrument cluster, and a 12.3-inch touch sensitive display for the infotainment head unit. The Harman Kardon sound system introduces 16 speakers to the cabin, and two-axle air suspension adds an additional level of comfort when you need it.

The manufacturer quoted fuel consumption figure for the BMW X7 stands at 9.5 litres per 100 kilometres, which works out to 10.5 kilometres per litre of fuel. This is surprisingly good for a car that weighs north of two tonnes, with massive aerodynamic drag penalties and a four-wheel drive system to boot. The figure is, however, heavily dependent on the way in which you drive. If you choose to drive aggressively, that turbocharged engine up front will consume fuel at a far greater rate.

BMW Gets Its Interns To Chop The Back Off An X7

BMW Australia Confirms Sale Of BMW X2 and X7, In Showrooms By 2019 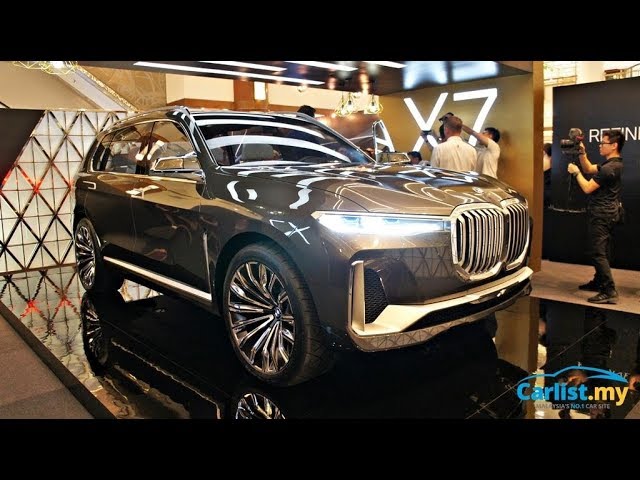