Much like a certain other luxury car brand that hails from the northern part of Europe, Lexus has had to go through a bit of a re-invention in the last few years – although this is more to keep the brand relevant as there hasn’t been much in the way of innovation and development across the board beyond the flagship Lexus LS and the incredible Lexus LC coupe.

It’s the more mass-market models that have suffered as a result, and so Lexus decided to create a new entry-level product to the range. At one point in time this was the Lexus CT 200h, but that has long been phased out. The choice for Lexus was presented: create a replacement compact luxury car, or create something entirely different.

The Lexus UX was born out of the latter choice, and it makes an incredible amount of sense. Compact hatchbacks and sedans are falling out of favour with an increasingly discerning consumer base, and many buyers are gravitating towards SUVs and their smaller crossover brethren. There are a variety of reasons, from the extra space offered to the more commanding driving position, and even things like better comfort and durability.

Make no mistake, however – these cars are never really meant to go off the beaten path. That is a concept of the past, and you see numerous SUVs across a variety of market segments being packaged with only front-wheel drive. There’s also a large emphasis on making these cars behave more like the passenger cars that were seemingly passed up by consumers – a slight irony here.

There is but one powertrain available for the Lexus UX, and it happens to be an interesting engine that isn’t particularly common here. It’s a naturally-aspirated 2.0-litre petrol engine from a series of engines known as Dynamic Force, which is essentially the most modern and efficient naturally aspirated unit available from the brand. There’s infinitely variable valve lift on both the intake and exhaust, allowing for a much broader power band.

In this state of tune it produces a healthy 169 hp and 205 Nm of torque – the latter figure being produced from 4,800 Nm and up. This power is delivered exclusively to the front wheels – no surprises here – through a CVT-type automatic transmission with ten virtual ratios and direct shift technology that allows for more positive engagement and better take-off acceleration from a stop. This transmission allows one to maximize the engine output as much as possible, while also returning good fuel consumption figures when cruising at relatively high speeds.

There are various drive modes that you can select from, depending on the variant. The UX 200 Urban and Luxury variants get the ECO, NORMAL, and SPORT modes, while the F SPORT variant adds on SPORT S+ and CUSTOM modes to really tailor the driving experience to your needs. The overall chassis layout is based on the TNGA platform, and the Lexus UX relatively mirrors the Toyota C-HR in various key dimensions and components. This gives it a MacPherson strut front suspension with a trailing wishbone setup at the rear for superlative handling dynamics without any cost to the ride quality.

The power steering unit here is electronic, though that has become the norm for pretty much every car on the market these days. The weighting and feedback is well calibrated here, providing you with just enough information to know what the front wheels are doing, while filtering out all the unwanted jitters and undulations on the road that can be unpleasant and unnerving to the touch. Adaptive Variable Suspension is limited to the F SPORT model as well, giving added flexibility and bandwidth in this regard.

The outside of the Lexus UX is something that you would come to expect from your modern luxury crossover, being a combination of angular sharp edges and elements combined with the stylistic cues of Lexus’ most current products. There’s no hiding the fact, however, that this is meant to be a crossover and not a full-blown SUV: the key-giveaway is the fact that the ride height is artificially accentuated by black-coloured lower body mouldings, and if you open the doors you’ll realize that the door sill actually sits fairly low to the ground which in turn doesn’t give you all that much ground clearance.

When it comes to the inside of the Lexus UX, you are presented with a peculiar problem and you can begin to understand the limitations of Lexus’ design language when it comes to the interior. Everywhere you look there is clear evidence of craftsmanship and luxury, combined with high-tech elements that remind you you’re in the 2020s. The only problem however is that this design language works well with larger cars and in larger forms where there is more real estate to work with, and in this case there just isn’t as much room. For front passengers, the view is as elegant as it is a soft to the touch; for rear passengers you may be in for a slightly claustrophobic ride.

As is the case with quite nearly every Lexus model, the Lexus UX comes equipped with a comprehensive suite of safety systems that’s pretty much flat across the range. This includes items like pre-collision braking (autonomous emergency braking), dynamic radar cruise control, lane keeping system, and so on. That being said, the blind spot warning system is omitted from the entry-level variant.

In all honesty, it can be a little hard to see the point of the Lexus UX. As a product it’s fighting in a space that’s highly competitive with rivals coming in at lower price points and offering arguably more. Beyond this there are issues with the fact that it’s still packaged with a naturally-aspirated engine – something not particularly common these days – and doesn’t quite have the interior space and practicality that you would want from a compact crossover vehicle.

The hefty front seats eat into the rear legroom, and the tapering roofline can prove a little claustrophobic for rear passengers as well. In general, the padding and spacing of the dashboard and door panels ends up eating into interior space in a noticeable way – and most frustrating of all is the fact that the rear bumper forms the leading edge of the boot which means that you can’t place heavy objects or sit on the edge of the boot like you can with over SUVs.

With all that in mind, the Lexus UX rides and handles impeccably, with noise insulation that punches far above its weight. Let’s also not forget that the sound system it comes packaged with is impressive, even if you’re not getting the Mark Levinson system in any of the variants here. It may not be the most practical choice out there, but if you’re buying a luxury car then practicality wasn’t exactly at the top of your list to begin with.

Pricing for the Lexus UX starts at RM 236,443.50 for the UX 200 Urban, going up to RM 274,998.50 for the UX 200 Luxury, and topping out at RM 290,335.00 for the UX 200 F SPORT. As is the case with all other Lexus models, it’s fairly self-explanatory as to what the F SPORT receives over the rest of the models, which can help justify the not insignificant price premium as it is more than just a more aggressive set of front and rear bumpers.

If you were to opt for the range-topping Lexus UX F SPORT variant, the obvious party piece would be the instrument cluster that gets a movable bezel atop a fully digital screen with customization and adjustability to display exactly what you need, when you need it. For the other models however, there’s still a fairly versatile head unit that provides good functionality and usability, as well as connectivity to smart devices and inbuilt navigation (though you’d use the former with mirroring functions instead.

Quoted fuel consumption for the Lexus UX is identical regardless of which variant you choose. They all return roughly 6.2 litres per 100 kilometres, which translates to 16.1 kilometres per litre. Being naturally aspirated, this figure tends to be more stable even with slightly spirited driving g- though the continuously variable transmission may also result in more fuel consumption as harder driving keeps the engine speeds up which in turn consumers more fuel than you might expect.

Lexus UX With Its Gorgeous Taillights Teased - Price from RM243,888

Lexus is Dropping the 't' Badges For Their Turbo Models 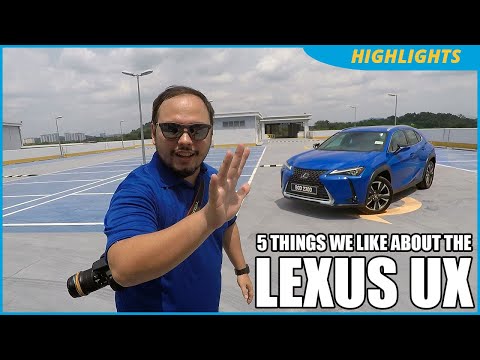